When a major international automobile manufacturer switched to a cheaper corrosion-inhibiting solution for overseas CKD shipments, it didn’t anticipate the cost-cutting decision to cause a negative effect on its bottom line. Prior to reducing spending, the company used Zerust VCI corrosion-inhibiting packaging film and had no corrosion problems. Soon after switching to a generic product, the company learned the true costs of preventable corrosion.

It wasn’t long before complaints of corrosion were reported by customer plants in the U.S. The lower-cost corrosion-inhibiting products, while promoted as “similar” to Zerust VCI Film, actually performed less effectively than plain polyethylene packaging that contained no corrosion inhibitors! Complaints and part replacements were costing the company over $200,000 USD—with no end in sight.

The company decided to reevaluate Zerust products and used Zerust Ferrous and Multimetal Film to protect shipments. Parts packaged with the Zerust VCI film arrived in good condition with no corrosion—even at critical areas, such as welding points. The auto manufacturer decided to change back to using on Zerust corrosion-inhibiting products. Corrosion complaints decreased significantly, and the manufacturer learned the true bottom-line value of proven corrosion control. 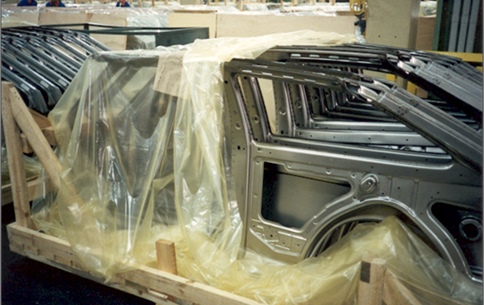